I wrote this when I was a teacher at a boarding school, which demanded much of my time. Sadly, I needed to juggle time with my daughter and my job, and there was never really enough to go around. Every decision I made to leave to go to work was like one small moment of suicide. I hope you’ll appreciate this narrative:

She’s entered school now, in pigtails, with purple snow pants, a light purple jacket, and purple and lightpurple boots.  It’s a moment I’ve been looking forward to in dread for years.

She gets up in the morning, groggily, while I’m still in bed: eats her breakfast on her own, dresses herself, goes to the potty; she is three and a half.  Her mother drives her in in the mornings when I go to work, picks her up (while I’m still at work).  Apparently they have raisins as a snack.

She’s made many friends, but some of them she recounts as having fictional names: one is named simply “Frozen,” after a Disney movie.  Her mother believes it was a girl she met at the West Hartford Children’s museum, the one who got her sick by sneezing directly into her mouth.  I wasn’t there.

Every breath she inhales seems monumental, momentous, every word and moment, like they should grasped, held tight, and framed and stuck up on the wall, immortalized forever.  They are scattered in my phone apps– voice memos, pictures, videos– scattered like toys on the floor of an electronic history.  A digital imprint seems so incomplete, yet I pause our every interaction to capture them: hold on a minute while I write something down, wait let me take a picture on my phone.  It’s out of memory, out of batteries, in the other room.

When I leave for basketball practice she wonders if she can come, or sometimes, if I can just stay: keep on playing hide and seek, or chase, or read her another book, and I have to say ‘no.’  She is silent.  The worst is when I tell her I have to leave and she says nothing at all, or it doesn’t register, so I repeat it, several times, the words echoing into the silent hallway, through which she presumably retreated to get to her room, that pink tent she hides in when the vacuum goes on.  Finally I walk down the back stairs and out of the apartment without ceremony and silence blots out the inner monologue of my mind for a time, drifting down the back stairs, the echoing of footfalls metallic thunder.  I’m late again.

When I get back she is asleep, her blonde head buried beneath the blankets, draped in the darkness.  I sometimes sneak into the bedroom, and even though I can’t see her I strain my eyes in the darkness, and use their aching imaginations to visualize the pudgy, pale lines of my daughter’s face in the black. My straining eyes always add a little smile that trickles off the sides of her mouth, content dreams of Pinocchio and Peter Pan.

One afternoon, it is just the two of us– my basketball practice will be later.  We are playing tea party with her wooden tea set and a wooden cake.  Two of her dolls join us for the party.  After serving the dolls, she serves me a piece of cake and I blow out a wooden candle and make a wish.

“What did you wish for?” she asks me.

“Oh,” she says and pauses, the gears of her little mind turning.  She puts on last year’s Halloween costume, a Snow White dress.  She adds a purple and teal fairy crown for good measure.

“I’m the tooth fairy now, so you can tell me,” she says, that pleading look in her giant brown eyes.  I hesitate.  What the hell… Why not?

“I wished that your baby brother will be born healthy and strong, with all his fingers and toes.”

“Ohh,” she says and gives a cute little laugh, the one she gives when she knows she’s laughing.  She blows out her wooden candle.

“Now you’re the tooth fairy so I can tell you,” she says.  She looks at me right in the eyes and stares so long it’s like she’s looking through me and through the moment.  She sees something back behind my head and far away that I can’t, inside my retinas and through my skull. She stares so hard it becomes déjà vu.

“I wish to climb a tree for fifty hundred miles before.  I wish you were in it, but you weren’t.  Mama was in it.”

Struck, I scramble to write down this gem, to preserve it in words that can’t be erased.  I fumble stupidly for my phone in my pocket to do so, but in the madness, the meaning of the words fade from the afternoon, and we’re left with long stares alternating between the window and two wooden cups empty of tea as I slip the phone back in my pocket in defeat.  As the time lingers, her baby dolls’ frozen faces wait for a sip in silent anticipation.  The minutes evaporate, but their features remain, taut and ready in the intermittent beams of bright afternoon sun, waiting pleasant and patient for their imaginary tea. 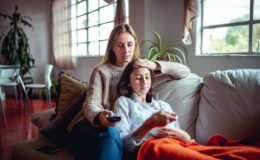 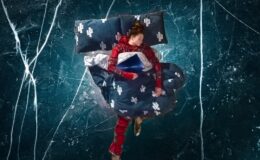