Taking Kids to the ER during the Pandemic

Taking Kids to the ER during the Pandemic

So it finally happened. That dreaded rite of passage. Three days after Pandemic Thanksgiving, my eight year-old daughter slipped off a chair and broke and dislocated both bones in her forearm. It was pretty stunning, as you might imagine. But mainly because I had seen this girl use a hose to make a swing from a 20-foot porch deck over granite stone, climb onto steep, slippery-shingled roofs, and ascend sheer rock cliffs without so much as a scrape. Sometimes you just fall, I guess.

I’m ashamed to say, but my initial reaction was anger: I was angry that she had been careless again and now was hurt. I was also angry in facing the prospect of going to the hospital in the middle of the pandemic. My wife immediately suspected that we would all die. But as my daughter lay screaming and crying on the couch holding her arm protectively beneath her body, more tender feelings inevitably crept in. We had to wrap her gently in her jacket and shuttle her out the door.

When we got to Connecticut Children’s Hospital, it was pleasantly empty at 6PM on a Sunday evening. She got into surgery remarkably in about 90-minutes from when we got there. They had calmed her using the promise of a blue popsicle following the surgery (these people know their work!). Mike, the bone doctor, was “very nice,” she said, as he inspected the X-Rays and spoke quietly to me about the incredibly scary shit that could potentially happen. As they prepped her in the OR, they injected her with Ketamine (My wife asked incredulously, “isn’t that like, a party drug?”). She went down immediately when they stuck her with it, unnervingly with her eyes open. They quickly shuttled me out of the operating room to a room next door no wider than a closet. I had both masks on but glanced around nervously imagining my death on every surface.

It felt like the end of something, some piece of her childhood maybe, the childhood that I attempted to cling to with every picture, every video, and every interaction, every nuance. I mean, she was never perfect: born with stork bites and other birthmarks, and a purple hemangioma the size of a quarter on her tongue; she came out like a cold, blue squid. But I guess what was perfect was my status as a parent that could keep her safe, keep her unbroken. It was in the middle of this thought that my wife texted me this:

“Your children are not your children. They are the sons and daughters of Life’s longing for itself. They come through you but not from you, and though they are with you yet they belong not to you.” (An excerpt of a poem by Kahlil Gibran).

I loved the words so much I wanted them to be mine. The truth of them was painfully regretful but entirely emancipating.

Soon after I was invited back in to see my very loopy daughter, or rather, to see Emerson…. She was casted up and sedate but alertish. (She said her head was fine but one annoying eye wouldn’t work yet.). They soon released us after her shockingly quick recovery from the anaesthesia. We couldn’t put a shirt on over her cast, so instead of wearing a jacket, she insisted on going outside in 40-degree weather in a hospital gown and basically nothing else. Her mother would probably have murdered me, but I let her, because, well… she broke her arm.

You earn scars in this life and that is what it is, though I’m stunned that a week later she was back climbing on the exact same chair in the exact same position, only now with a cast on. But this time there was more distance from my own incredulity, like reading another author’s thoughts in a familiar book.

She’ll probably break more bones, and crash cars and blow off tests, and let down caring people trying to help her. I’ll watch the show with interest, (and probably pay another 50 Gs in medical bills and automotive repair….) but it won’t be my show. It was never meant to be. 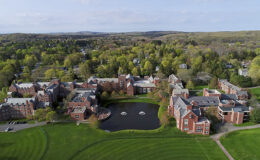